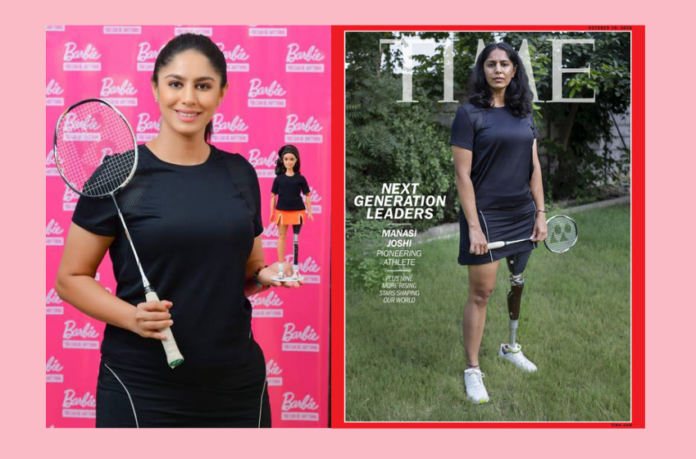 Manasi Joshi, Indian para-badminton star, is outstepping boundaries and breaking physical and emotional stereotypes. The inspiring stalwart has been celebrated by Barbie by getting a one-of-a-kind doll modelled to her likeness.

Adding another star on the crown of her achievements, it was on the occasion of the International Day of a Girl Child 2020, she joined the select club of women, Barbie Sheroes, who have had Barbie dolls modelled after them. With this, she becomes the only Second Indian woman, and first para-athlete to have a Barbie doll model after her.

What’s more? The 31-year-old has been featured on the cover of Time magazine’s Next Generation Leader. This list contains only 10 people- trailblazers who are forging new paths, crossing boundaries, and creating change”. Last year she had won gold at BWF para-badminton world championships, beating compatriot and world no. one Parul Parmar in the women’s singles SL3 finals.

Her engagement with badminton began when she was just 6 years old. She used to play with her father who was a retired scientist from the Bhabha Atomic Research Center. Besides, in the school, her knack for badminton increased and she went on to play a school and district level. After completing her graduation in 2010, she started working as a software engineer with Atos India. And there she won a gold medal at an intra-corporate badminton tournament in 2011. However, Mansi Joshi never hit the road to become an international athlete as well as an advocate for disability rights in India. In 2011, in a road accident, she lost her leg and this incident had rooted her out from the path of a software engineer and set her on the path to embark on a more meaningful journey.

She is now endeavouring to qualify to represent India at badminton in next summer’s Tokyo Paralympic games. In addition to that, she is becoming a remarkable campaigner for millions of disabled people in India. Her sports journey started when her friend and para-Olympic player Neeraj George encouraged her to take up badminton as a professional again. She failed to secure her place in the 2014 Para-Asian games, however, she won a silver medal at the national games in the next year. This exposure and professional environment had boosted her inner positivity and self-confidence.

She doubled down her training, stretched her training hours, and maintained a balance between her work and badminton. In 2016, she quitted her cushy corporate job to concentrate on her badminton career. In 2018, she moved to Hyderabad where she worked on her game three sessions a day, six days a week, at the Pullela Gopichand Academy. Even before gaining popularity as an athlete, she had been vocal in urging the Indian government to waive taxes on prostheses and other disability aids. And now her popularity has helped to amplify the issue.

Mansi Joshi and disability campaigners hope a strong showing at Tokyo’s para-Olympic next summer could bring a change in the outlook about disabilities in India. Joshi believes that her sport will inspire people to find possibilities and opportunities in hardship.